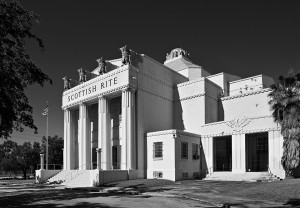 Yogananda began a planned two weeks of lectures and classes in the Scottish Rite Temple in Miami, Florida. They were to be followed by Yogoda classes during February at the Anglers Club in Miami, and free lectures at the Central High School.

Yogananda was soon forced to leave Miami by Police Chief H. Leslie Quigg. The local press reported the incident as follows: “His life threatened by a delegation of indignant citizens, Swami Yogananda, East Indian love cult leader, was at a hotel tonight determined to stay in Miami ‘and fight it out,’ despite Police Chief N. Leslie Quiggs’s order that he leave town immediately.” Yogananda later referred to this incident as “my Miami crucifixion.”

East West Magazine reported in its March-April issue that Quigg had been arrested for murder on March 23, 1928.

Yogananda gave an 8:00 PM lecture in “Miracles of Raja Yoga, Its Western Misconceptions” at Washington Auditorium in Washington, D.C.

Yogananda gave the first of three 8:15 PM talks at the Union Auditorium (at the Union Methodist Episcopal Church) in New York under the auspices of the Fellowship of Faiths and the Dharma Mandal (The Hindu Religious Association).

Yogananda lectured at the Athenaeum Auditorium in Kansas City, Missouri on “Law of Attracting Abundance and Health Consciously.” 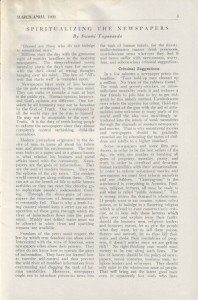 This article by Yogananda appeared in the 1928 March-April issue of East-West, above the news of the arrest of former Miami Chief of Police H. Leslie Quigg.

“From a thorough study of the situation of public life in America,” Yogananda wrote,  “I am of the opinion that the reputation of no public man is safe from being wrongly newspaper-handled. Many newspapers try to create prejudice against individuals and nations to suit their nefarious ends of narrow, bigoted, short-sighted political views.…”