Yogananda lectured at the Athenaeum Auditorium in Kansas City, Missouri on “Highest Science of Superconcentration and All Round Success — Yogoda.” 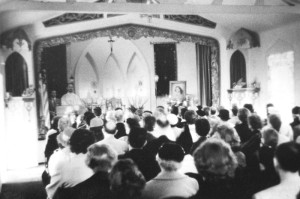 Hollywood Temple in the 1950s during a Sunday Service.

Yogananda gave an afternoon class at Hollywood Temple that was later included in the book The Divine Romance as “The Why and How of Religion.”