Yogananda completed his first course of classes given in Los Angeles.

Yogananda lectured at the Athenaeum Auditorium in Kansas City, Missouri on “How to Analyze People at Sight (Using the Mental Microscope).” 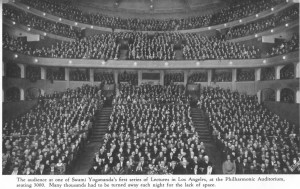 In 1925, Paramhansa Yogananda may have been the most sought-after speaker in the United States. He shared spiritual insights in a way that Americans could appreciate, offering what he called “original Christianity” as taught by Jesus Christ.

During his first series of classes, the Los Angeles Times reported,

“Thousands being turned away from the three thousand seat philharmonic auditorium.… Swami Yogananda is the attraction. A Hindu invading the United States to bring God in the midst of a Christian community, preaching the essence of Christian Doctrine.”