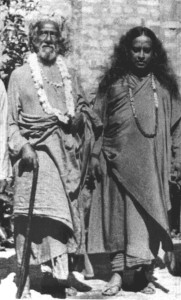 As Paramhansa Yogananda wrote in chapter 42 of Autobiography of Yogi,

I entered the ashram room where Master’s body, unimaginably lifelike, was sitting in the lotus posture—a picture of health and loveliness. A short time before his passing, my guru had been slightly ill with fever, but before the day of his ascension into the Infinite, his body had become completely well. No matter how often I looked at his dear form I could not realize that its life had departed. His skin was smooth and soft; in his face was a beatific expression of tranquillity. He had consciously relinquished his body at the hour of mystic summoning. 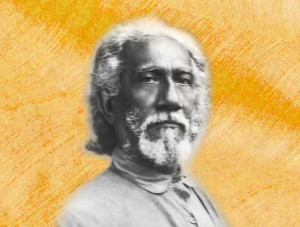 Yogananda said that Swami Sri Yukteswar was a gyanvatar, an incarnation of wisdom.

Born to a wealthy business man and his wife on May 10, 1855, in Serampore, India, he was given the name Priya Nath Karar. In time he became a disciple of Lahiri Mahasaya, whom he called “the greatest yogi I ever knew.”