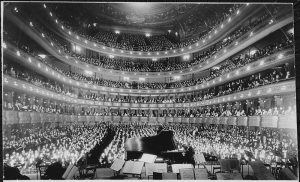 Yogananda began a week-long series of lectures at Carnegie Hall in New York City. On this night, a free lecture, he led the audience in an hour and twenty-five-minute chant of “O God Beautiful.”

“We had chanted ‘O God Beautiful!’ for over an hour,” Yogananda later said. “Three thousand people had joined me joyfully in singing this chant. Many were in ecstasy.”

This chant, “O God Beautiful,” was composed by Guru Nanak, while Paramhansa Yogananda translated it into English and added his own melody.