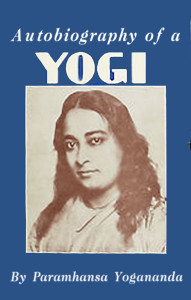 The original book, published in 1946.

Autobiography of a Yogi was honored as most outstanding book of the month by the Manuscripters, the largest active writers’ group in the West.

Yogananda wrote to Rajarshi Janakananda that he is going to 29 Palms “to specially spur Laurie in printing first Second Coming of Christ, then Bhagavad Gita, then Omar Khayyam, Revelations, Dick’s book (almost finished) and then another book Shankar Krisna Babaji.”