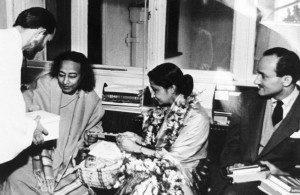 Yogananda resumed his lectures and classes at Jordan Hall, Boston, Massachusetts, with lectures each Sunday evening, and each subject advertised in the local newspapers.

Yogananda wrote to his disciple Mildred Lewis on stationery of the Hotel Pennsylvania in New York City.