Yogananda wrote to Rajarshi Janakananda Lynn from 29 Palms that only 4 of the 13 chapters of his Bhagavad Gita commentaries were left to finish. 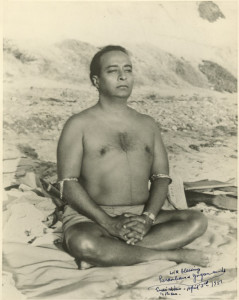 Paramhansa Yogananda signed this photo of him meditating at the beach in Encinitas, later named “Swami Beach.”

An article by Paramhansa Yogananda.

Why do some elderly people remain youthful and others not? Why are some young people already old? Diet and exercise play a part, but aging starts primarily with the mind.…

In America one finds many elderly people who have remained youthful. The American temperament is marked by qualities that make for mental youthfulness — active thinking, openness to new ideas, and a love of experimentation. Americans have the consciousness that everything is possible. Of all the people in the Western hemisphere, they are the most spiritually curious — one grows younger seeking Truth.